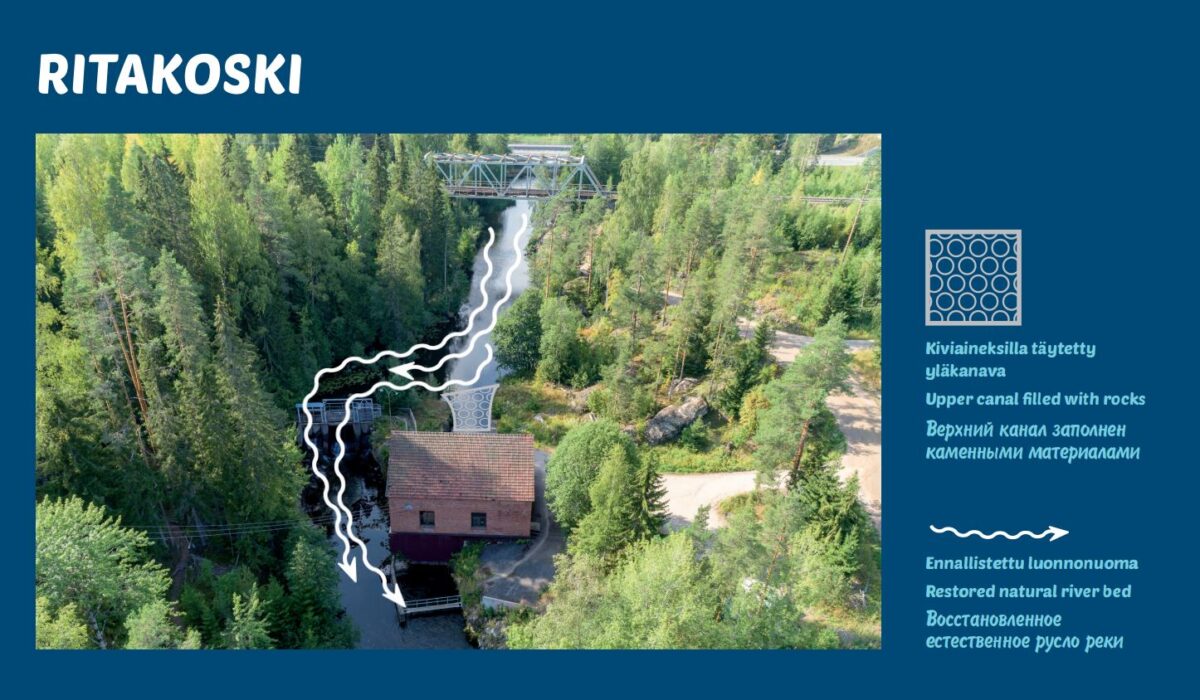 Ritakoski is located near highway number 6

Most of the Hiitolanjoki rapids have had water mills before industrial times. In Ritakoski, the mills, two at the top and bottom of the rapids, were last owned in the early 20th century by local merchant P.J. Reinikainen. Ritakoski has a built height of 4 m, a power of 0.4 MW and an average annual electricity production of 2200 MWh.

Ritakoski became the property of the Recreation Area Foundation in South Karelia in October 2019, when the Foundation acquired the shares of Hiitolanjoki Voima Oy. Electricity production ceases in Ritakoski, the last of the three rapids of the Hiitolanjoki River. The building of the Ritakoski power station will be refurbished to serve tourists, the location near the motorway makes it accessible and comfortable for visiting.

Ritakoski Power Plant was built on the site of the Upper Ritakoski Mill in 1921. This was the fourth of the Hiitolanjoki River hydropower plants. It was built by Aktiebolaget Simpele, a local woodworking and paper mill, which began operations in 1906 and later became part of United Paper Mills. Today is M-Real factory, a cardboard manufacturer in Simpele. The goal was to reduce firewood consumption and increase the amount of wood. The historical position of hydropower is illustrated by the fact that wood production soon doubled.

The original equipment consisted of 2 Francis turbines with a vertical axis, supplied by Tampella. They have not survived, but the engine room still has impressive old cars. Specialty – massive flywheel generators of generators that save the energy of movement of a rotating shaft in temporary blackouts.