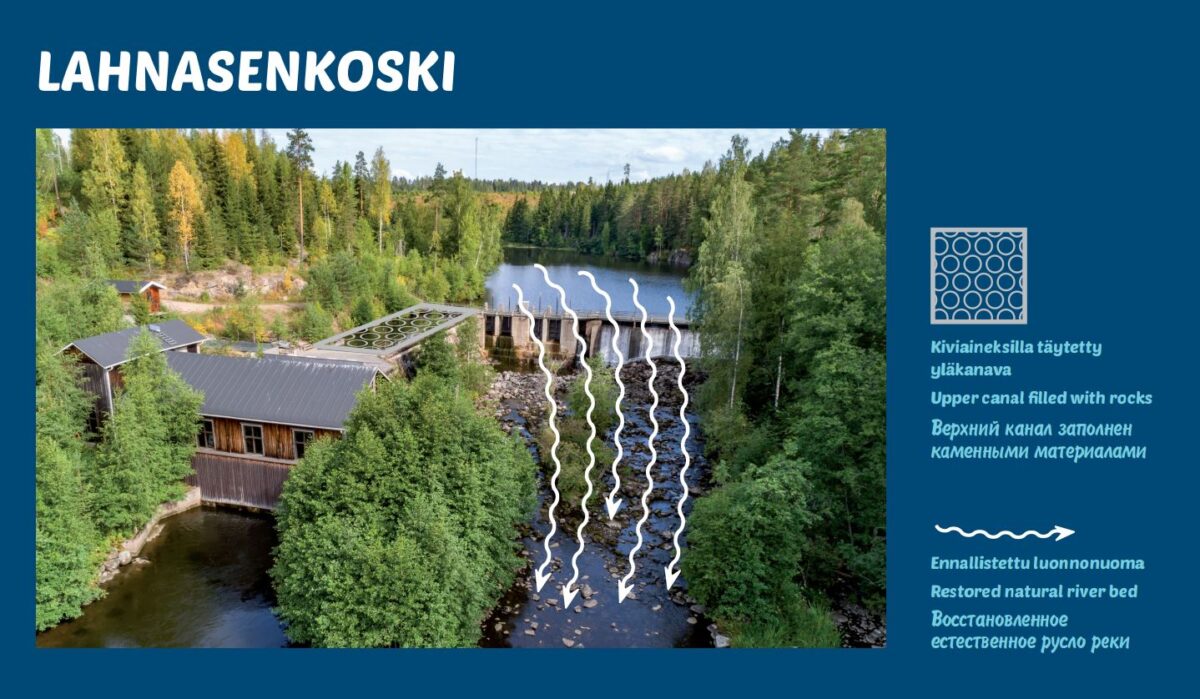 Lahnasenkoski has the highest waterfall

Lahnasenkoski probably got its name because of the favorable shelter for fish located below the actual rapid. This full-flowing riverbed is sometimes referred to as Lahnalampi (a bream pond), and significant fish catches can be made here. The construction height is 8 m, the capacity is 0.8 MW, and the average annual electricity generation is 4,500 MWh.

Lahnasenkoski will be released in 2022

The South Karelia Recreation Area Foundation purchased the Lahnasenkoski power plant property in 2017 from Vantaan Energia Oy. The rapid restoration plan has been submitted to the permit processing of the Regional Authority of Southern Finland. Electricity will be transferred to the nationwide grid until 2022.

Simpele Oy, a producer of fine-grained brown paper, needed more power at the beginning of the 20th century for its mill in Simpele. The hydroelectric power station of the highest river on the rapids of Hiitolanjoki, Juvankoski, was already operated and provided electricity to the sawmill and then to the mill. Therefore, it was decided to continue the construction of the lower rapids. The Lahnasenkoski Power Plant, designed by engineer Axel Söderlund, was built in 1911 and became the first power station to generate electricity on the Hiitolanjoki River.

The power plant functioned with almost all the original equipment until the 21st century. In 2001, Vantaan Energy Oy acquired the Lahnasenkoski power plant, which, like Ritakoski, installed four compact Waterpumps Oy turbines. In the old power station there is a museum exposition, access to which can be obtained in the municipality of Rautjärvi. For example, a mechanical-hydraulic regulator and a marble control panel refer to the initial construction period of the station.