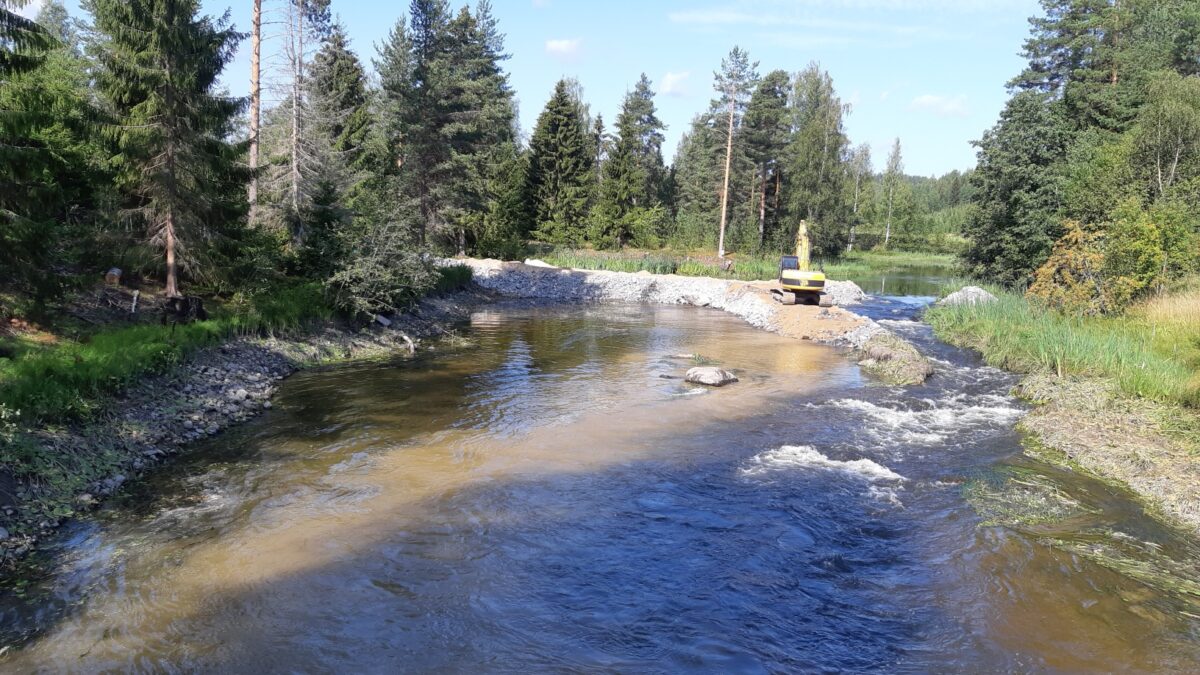 DO NOT ENTER CONSTRUCTION AREA WITHOUT THE PERMISSION OF THE RESPONSIBLE FOREMAN AND WEARING SAFETY EQUIPMENT.

Work in Kangaskoski began immediately at the beginning of August. The power plant’s Kaplan turbine turned to standstill after had been grinding electricity for almost 100 years.

When the water could no longer flow through the power plant, water rose in the canal and ran through the overflow hatches.

In order to prevent the water from rising too high above Kangaskoski dam, the hatches of the regulation dam were opened and the water was released into the natural rapids, ie the former river bed. Timing the start of the work at end of the summer when the flow is small, the work machines were able to move in the river bed. The spawning gravel for salmonids had been brought to the rapids in July before the dam demolishing project, when the riverbed was still dry.

Work was first started at the top of the future rapids by bringing rocks and quarries to the working dam. The machine was able to work on the work dam and shape the top of the rapids.

Large rocks have been brought to the upper section of the rapids and the shoreline are designed.

At the bottom of the river was found such an old roller – what is it possible and what is its age?

When the upper part of the river is ready to maintain the level of the water surface above, the dam hatches were completely opened. As a result, water began to fall at the dam and the upper channel began to dry out.

Excavated rock and old structures were exposed from the canal.

A new tributary was excavated from the rapids, which also brings flow to the water basin below the power plant. In the excavation work was revealed a concrete slab, which is part ot the structures of the previously located paper mill was found on site. An opening to the creek was pierced through the concrete.

Work on the upper duct began in in the beginning of September. The overflow openings and power plant duct will be blocked with concrete walls before the duct is filled. The power strainer can be seen now.

The dam will be finally opened, allowing the water level to fall above the dam and in the power plant channel.

The Kangaskoski dam was demolished in early September. To be able to work at the dam, a construction site was built cross the river, under which water was led through drum pipes. When the work at dam is done, all construction sites will be removed as well from at the upper part of the rapids and at the dam. The design of the Kangaskoski rapids will be finished in the river and at shorelines.

Actors of the Kangaskoski project

Financing of the Kangaskoski project

The restoration of Kangaskoski is an action of the RivTimes project co-financed by the Southeast Finland – Russia CBC program. The rest of the funding are grants and donations received for the restoration of Hiitolanjoki. The main donators for Kangaskoski are WWF, OP Simpele and Patagonia /Tides Foundation. The purchase of the power plants was financed with the grants from the Ministry of Agriculture and Forestry in Finland, South Karelian Foundation of the Savings Bank, Municipality of Rautjärvi and several private companies and persons.